How to write a story

What is a story?
A story is a series of events, incidents and experience involving characters and action.

Elements of a story
1.     Setting
description or mention of time, place, occasion, etc. – what where and when
2.     Plot
Main idea, concept or incident around which whole story revolves or develops and action takes place around it
3.     Characters
main characters/people involved in in the action/story, speaking their dialogues
4.     Interest/surprise
invoking/arousing interest of audience through some twists or unlikely turns or unexpected incidents/act/event, including nail biting moments
5.     Theme
The notion/theory/thought the author wants to highlight/convey through the story, characters and dialogues

PHASES OF DEVELOPMENT OF A STORY 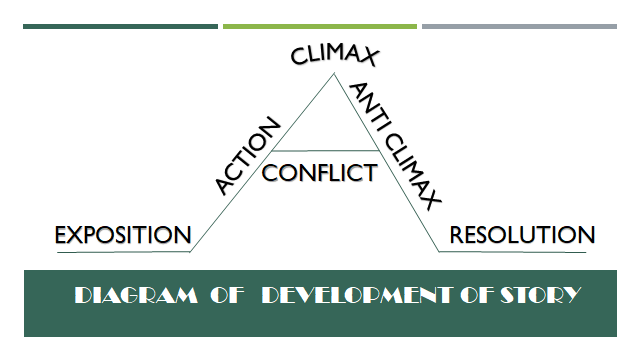 1.     EXPOSITION
Proper beginning of story should reveal the place, time, scene and main characters which the story is all about, e.g. once upon a time there was a kind and just king in the kingdom of Rajgarh.
2.     ACTION
Interesting happening or incident should take place as story advances. Some or other thing should happen at each step.
3.     CONFLICT
Occurrence of some problem/hindrance/unlikely incident should happen as the story reaches its middle. Hindrance may be natural, social or psychological.
4.     CLIMAX
Problem becomes graver or intense and nail biting moment should arise as the action reaches its peak and anything could happen, next. The readers must think, “now what”?
5.     ANTI CLIMAX
The action falls down and the resolution of problem begins by appearance of someone/some happening. Something happens which is contrary to climax and the story becomes even more interesting.
6.     RESOLUTION
The intricate problem which reaches at its climax gets solved and everything settles for a Happy Ending. 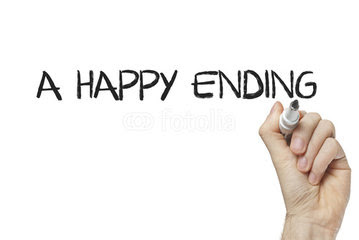 Note : Every story may not have a happy ending, necessarily. It may have a tragic, unexpected or unconventional ending.

1.     An interesting title should be written at the top in the centre and it should be underlined.
2.     You must start your story with the beginning given in the question/task.
3.     Story should be narrated in the first or third person of pronoun, e.g. I or he.
4.     Scenes and characters should be described.
5.     Dialogues must be given to the characters.

Example of a Story

Q. Once, there was a boy in a village. His name was Abdul. He lived with his mother in a small hut. One day, the boy headed for the city to sell the bundle of his logs as it was his livelihood ………. Complete the story in about 200-250 words.

Once, there was a boy in a village. His name was Abdul. He lived with his mother in a small hut. One day, the boy headed for the city to sell the bundle of his logs as it was his livelihood ………. Abdul sold all his logs by evening and he was very happy to earn good amount of money.

While he was going back, it started raining heavily. Now, he was worried to think that his notes may get wet. Next moment, he saw a small house at a distance. He thought of getting into that house but was scared. Then, he realised that somebody tapped on his shoulder. “You will get wet, here,” said the man in his forties, “come with me, I live nearby.” As they both started for his home in hurry, Abdul saw a stranger coming towards them. However, he did not give much attention to him.

They reached the house and as he was about to sit on a cot, he saw a knife in the man’s hand. Before he could speak anything, the man stared at him with wild eyes and roared, “Give me the money.” “I am very poor and my mother would be waiting for me, please leave me,” Abdul uttered in a feeble voice. The man clutched his shirt took his money forcibly. Abdul fell at his feet and said, “I can’t go to my mother empty handed, please give my money back.” Therefore, he decided to kill Abdul. As he was going to stab him with his knife, the stranger appeared from nowhere like a messiah and held his hand. After struggling for some time, the stranger got control over him and snatched his knife. He forced the man to give money back to Abdul.

While he was thinking what happened and how it happened, he reached his home with his mother waiting for him with tears in her eyes.

Email ThisBlogThis!Share to TwitterShare to FacebookShare to Pinterest
Labels: development of story, elements of a good story, how to write a story, language and style of story, score full marks in story writing, story writing