Tenses are mainly divided into three parts – Present, Past and Future. They are further subdivided into four categories – Indefinite, Continuous, Perfect and Perfect Continuous.

PAST PERFECT CONTINUOUS TENSE (also called Past Progressive Tense) is generally used for an action which began at some time in past and continued for some time in past. It usually emphasises duration or the length of time that an action took. This tense shows that the action mentioned in the sentence was continuously happening for a period of time in past / the time being reported / talked about.

Basic Structure of Sentence in the Tense

Basic structure of a sentence in this tense is –

Past Perfect Tense is used to describe/show/denote  –

1. Something that started in past and continued for some period/duration in past–

He had been working on the project for a year when he was fired. (started in past and continued for some period in past)

She had been sleeping for two hours when I rang her up.

2. To denote an action continued before another action in past –

They had been talking for over an hour before Tom arrived. (action continued before another action in past)

Shankar had been wasting his time in video games before he met his new teacher.

3. To denote an action that began in past and continued up to that moment, till the time being talked about –

I was irritated because he hadn’t been working at all. (in sequence with Simple Past Tense)

I did not know he had been doing an important project on History of India that time.

4. To emphasise long continuation of an action –

Mother had been working all day despite her sickness. (emphasis is over the length/duration)

I had been waiting for you all through the night.

Since – used to denote point of time when some work/action began.

For – used to denote for total duration of some work/action

The past perfect continuous form of a verb consists of three elements:

1. Past form of auxiliary verb ‘have’ – had (both plural and singular) 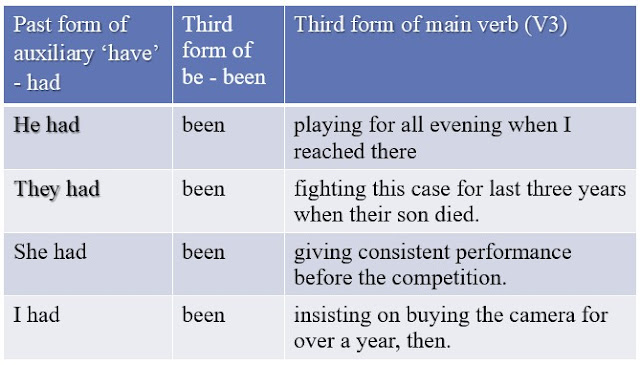 1. My mother had been working for 4 hours when I reached home.

2. I had been working in this firm for 6 years when I was suspended.

3. At that time I had been studying in the college for 3 years.

4. It had been raining for 3 days when we were stuck in jam.

5. They had been talking for an hour before they left for Jaipur.

6. What had you been doing there when I called you?

7. Mr. Joshi had been teaching in this school for 20 years when he retired.

8. Father scolded him as he had been sleeping the whole morning.