The Proposal by Anton Chekov

·       ‘The Proposal’ is a one act play written by Anton P. Chekhov, a renowned Russian playwright and short story writer.  It is a humorous play involving three characters – Lomov, Natalya and Chubukov.

·       The play, earlier titled as ‘A Marriage Proposal’, describes peculiar behaviour the neighbours tend to do. Lomov who comes to propose Natalya who lives next door, but before he could propose, they started quarreling badly and it ended up into ugly argument and exchange of abuses between the two dragging their families into it.

·       The dialogues are interesting and clever and they say it all about the characters. The captivating scene, catchy dialogues and the life like characters are highlights of the play.

§  The play opens in Chubukov’s libing room. Lomov enters, dressed in the 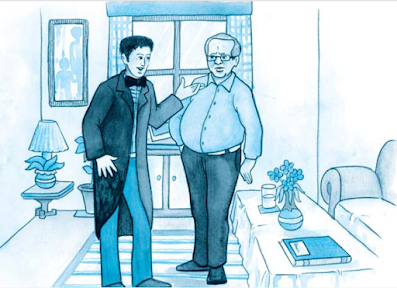 evening dress. Chubukov thinks that he has come to borrow money and says that he won’t give any money.   He asks Lomov about the reason of being dressed like that. Lomov has weak nerves so after talking much he could tell that he has come to seek Natalya’s hand in marriage. Chubukov is very excited and happy to hear it as he has been worried about his daughter’s marriage. Lomov asks if Natalya would be ready for the marriage. Chubukov says that Natalya also is in love with him and goes away to call her.

§  Lomov talks to himself that if he looks for an ideal girl or real love, he would never get married. However, he feels that Natalya is a good housekeeper, beautiful and well educated. He is already 35 of age and suffering from palpitations. He can’t sleep properly and jumps up like a mad person in the middle of sleep.

§  Meanwhile, Natalya enters and, to begin the conversation starts talking about the harvest. She also asks him why he is dressed as if he is going for a ball. Lomov tries to tell her the purpose, but he beats about the bush due to his nervousness. They started talking about the work happening on farms. Lomov tells how he inherited his ‘Oxen meadows’ from his aunt. 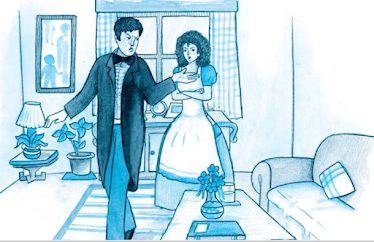 Lomov’s but hers. Lomov clarifies that earlier  there was dispute over the land but now, everyone knows that the land belongs to them. His aunt’s grandmother gave the free use of Oxen Meadows to Natalya’s father’s grandfather for free and in return they baked bricks for his aunt’s grandmother. The peasants used the land for forty years for free thus, they started considering it as their own.

§  Natalya expressing her claim over the land says that both grandfather and great grandfather reckoned that their land extended from Birchwoods to Burnt Marsh and since Oxen Meadows lie between the two, it belongs to Lomov.

§  Lomov says that he can produce the documents. But Natalya says that they are using the land as theirs for nearly three hundred years. She can’t accept unfairness though the Meadows are not worth more than 300 roubles. Lomov says he can present his land to Natalya who also offers to make a present of them to him.

§  Natalya starts accusing Lomov saying that they lent him their threshing machine delaying their work. Natalya calls him a land grabber. They start fighting and shouting at each other.

§  Hearing the loud voices Chubukov enters and clarifies that Oxen meadows belongs to them. He accuses Lomov of speaking disrespectfully saying that he is twice his age. Lomov calls Chubukov a landgrabber. Lomov says that his grandfather was tried in court for fraud and threatens to take Chubukov to the court. Chubukov says Lomov’s family is full of mad people, his grandfather was a drunkard, father a gambler and his younger aunt, Nastasya ran away with an architect. Lomov says Chubukov’s mother was hump backed and wants to say something more but, he gets cold and starts having palpitations.

§  They started abusing calling Lomov ‘a rascal’, ‘Villain’ and ‘the scarecrow’. Chubukov calls him a monster who has the courage to propose. Hearing the word ‘propose’ Natalya asks about it. Chubukov tells her that Lomov came to propose to her for marriage. Hearing this she starts weeping loudly and asks Chubukov to bring him back at once. Chubukov thinks that it is a huge burden to be a father of a grown up daughter and calls him back.

§  Lomov enters again. Natalya begs pardon and tells him that the Meadows belong to him. In order to avoid argument they start talking about shooting and the talk now shifts on dogs. Lomov tells Natalya that his dog ‘Guess’ the best dog has gone lame and that it cost him 125 roubles. Natalya says 125 roubles is too much for his dog as her father gave 85 roubles for her dog ‘Squeezer’ saying that ‘Squeezer’ is better than his dog ‘Guess’. Lomov stresses that his ‘Guess’ is better telling that Squeezer is overshot as his lower jaw is shorter than the upper. Natalya defends saying that their Squeezer is young and of the finest pedigree.

§  Both Lomov and Natalya start fighting over their dogs. Lomov’s heart again starts palpitating fiercely. Chubukov adds that Guess is old and short in muzzle. Lomov cites some facts for his dog’s superiority that his dog races neck to neck with the Count’s dog and in that race Squeezer was left behind saying that their Squeezer ran after a sheep. Lomov speaks about his palpitating heart and cold hands. Natalya says that he should go to the kitchen and hunt beetles and not go after foxes. Chubukov adds that Lomov should sit at home. Chubukov also abuses him calling ‘intriguer’, ‘pup’, ‘rat’, etc. Lomov tells that Chubukov’s late wife beat him and Chubukov says that he is under his house keeper’s slipper. He falls down in the armchair. Natalya thinks he is dead. Chubukov starts cursing himself and wants to kill himself because he fears that his daughter will remain unmarried. Then, he sees Lomov reviving. Lomov says he sees stars and asks where he is. Chubukov asks him to get up and get married as he doesn’t want to lose this opportunity again due to quarrels. Natalya is also willing to marry him. Chubukov asks them to kiss each other to finalise their relation. He feels that a weight has come off his shoulders.