Tenses are mainly divided into parts – Present, Past and Future. They are further subdivided into three categories – Indefinite, Continuous, Perfect and Perfect Continuous. 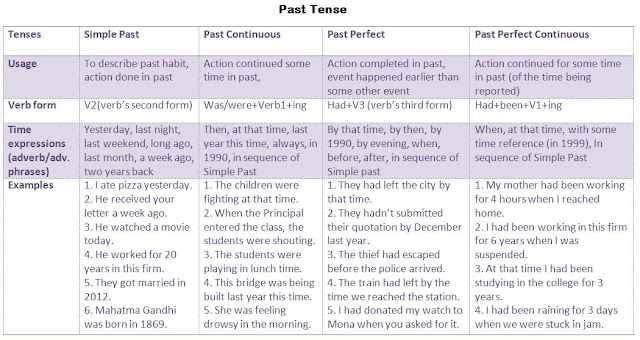 Simple Past Tense
Simple Past Tense is used to describe or denote an action that started in the past and ended in the past. It could be something that happened many years ago or something that happened some moments before. This tense is used to talk about a completed action in a time before now. Action duration as well as time of action is not important in this tense as it emphasizes that the action is finished that’s why this tense is also known as Past Indefinite Tense.

Usage of Simple Past Tense

1. This tense is used to indicate or describe an action/actions completed or happened in past. The time of the action can be in the recent past or the distant past.

Examples –
My friend, Sneha left the school last year.
We shifted to this place last month.
I didn’t attend the school yesterday as I was not well.

2. Simple Past is also used to talk about a past state of being or sentiments about something that happened in past. This is often expressed with the simple past tense of the verb ‘to be’.

Examples –
I was proud of my students’ brilliant performance on stage.
The engagement ceremony was a moment to be cherished.

3. Simple Past is used to describe past conditions and wishes.
Examples –
He could get a new job if he really tried.
I wish it wasn’t true.
4. Simple Past is also used to denote past habits or the habitual actions which discontinued in present time. Such actions or habits are also expressed with the modal auxiliary ‘used’.
Examples
I used to bite my nails, when I was a child.
I couldn’t sleep well when I was giving class XII board examinations.
He never fared well in studies during school time.

Time expressions (adverbs/adverb phrases used)
The most common time expressions used for the past simple are: yesterday, a week ago, a year ago, long ago, last month, last year, last weekend, last Monday, last night, day before yesterday, when I was a child, etc.
Note : Time expressions appear either at the beginning or at the end of the sentence.
Sequence with Past continuous Tense
Past Continuous Tense  is used as a time expression or time reference with Simple Past Tense to describe when some action took place some other work was going on/happening.
For example –
When we were going to Nainital, we were stuck in a hail storm.
He fell asleep while he was driving and met with an accident.