·       The chapter ‘Glimpses of India’ is written in three parts by three different writers from different parts of India, and that’s why they have successfully brought out true pictures of their regions.

·       This chapter presents a true glimpse of India which is varied in its heritage, rich in flora and fauna, land of cultural variety and a heaven for tourists.

·       The bread making tradition of Goa tells that people of India accept their rulers also and welcome all their good things making them a part of their culture for ever.

·       The chapter about Coorg demonstrates India’s richness in tourist destinations, wildlife, flora and fauna and the chapter on Assam proves its geographical variety, agricultural richness and economical strength.

Part I – A Baker from Goa by Lucio Rodrigues

The chapter dates back to pre independence era when the Portuguese ruled over Goa and influenced the local people with their culture and life style. The elders in Goa often fondly recall the time when bread making used to be an important profession. The importance of bakers is maintained even after the Portuguese have left. The bakers in Goa are known as ‘Paders’. The mixers, moulders and their time-tested furnaces even now, continue to be used in Goa as the profession is still being accepted by the bakers’ sons. The jingling sound and thud of bakers’ bamboo stick is still heard in the streets of Goan villages that would wake up the narrator and his friends in their childhood who used to run to him to take bread bangles.

Bakery products mark great significance in the culture and tradition of Goa. Bol or sweet bread is an integral part of marriage gifts. Cakes and Bolinhas or cookies are exchanged at Christmas and other festivals. The lady of the house prepares sandwiches for her daughter’s engagement.

In the time of Portuguese rulers bakers wear a peculiar dress known as ‘kabai’ which was a frock of knee length but during the narrator’s childhood, they wore a shirt and trousers of length slightly shorter than the normal pants. Baking has always been and will always remain a profitable profession would keep their families joyous and prosperous. It is believed that a baker’s family can’t die of starvation. 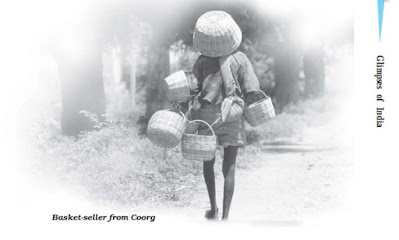 The writer has depicted the beauty of Coorg, now called Kodagu which is the smallest district of Karnataka falls between Mysore and Mangalore. It attracts many visitors with its evergreen rainforests, spices and coffee plantations. It is more fascinating and favourable to visit between September and March It is not advisable to visit Coorg in rainy season.

This Coorgi people are a mixture of Greek and Arab cultures and there are stories behind the fact. Coorgi people are known for their valour and boasts of the most decorated army personnel as it is believed that a part of Alexander’s army settled there. Their clothes reflect their connection with Arab culture.

It abounds in flora and fauna and the Brahmagiri hills present a panoramic view to the visitors. The presence of Buddhidst monks of a monastery at Bylakuppe near the island of Nisargandhama is a gift to the peace lovers. The fascinating beauty of Coorg reflects India’s very heart and soul.

Rajvir, a friend of Pranjol is going to Assam to acquire knowledge about tea gardens of Assam in his summer vacations as Pranjol is inhabitant of Assam and his father manages Dekhiawari Tea Estate. Assam is known to be the largest concentration of plantations in the world.

Rajvir is very excited about his trip and has done a good homework about tea and its cultivation. He wants to share his knowledge with Pranjol and tells him Indian and Chinese legends behind tea. Rajvir tells a very interesting story of a Chinese emperor who discovered tea by chance when his water was boiling, tea leaves fell into water accidently and changed the colour and taste of water which the emperor liked. He also tells another story about the growing up of tea leaves out of the eyelids of a monk and these leaves could remove sleepiness.

This way they both reached Mariani junction and after this, visited Dekhiawari Tea garden managed by Pranjol’s father. In the tea garden they saw groups of tea pluckers with bamboo baskets on their backs and a tractor carrying the load of tea leaves.

Rajvir shared another piece of information that second sprouting season of tea lasts from May to July. This shows much excited Rajvir was to enhance his knowledge about tea and its cultivation.

Bread bangles     sweet bread in the shape of a bangle

Q1. Is bread making an important part of Goan life and culture? How do you know this?

Ans. Bread baking holds a great significance in the culture and traditions of Goa and breads are an integral part of people’s life there. Bol or sweet bread is an integral part of marriage gifts there. Cakes and Bolinhas used at Christmas and other festivals. The lady of the house prepares sandwiches on the occasion of her daughter’s engagement. Bread making is still a profitable occupation and it keeps a baker’s family joyous and prosperous

Q2. The chapter ends with the phrase ‘visitors searching for the heart and soul of India, right here in Coorg’ Explain the phrase.

Ans. The author, Lokesh Abrol beautifully describes Coorg as a heaven for the visitors. Hospitable people of Coorg keep the very soul of Indian culture ‘Atithi devo bhava’ alive. Its hills, coffee plantations and evergreen forests truly present India as a land of geographical variety and agricultural richness. The Koorgi people are live example of India’s cultural variety and their mixed culture speaks profoundly about its unity in diversity. The Buddhist monastery at the island of Nisargandhama attracts peace lovers and help them find real peace and find the answers to the most puzzling questions of life.