Tale of Custard the Dragon

The Tale of Custard the Dragon

·         ‘The Tale of Custard the Dragon’ is a humorous ballad composed by Ogden Nash, an American poet who is known for his light verse.

·        A Ballad is a story in form of poem or song. It is meant to be narrated, sung as well as performed on stage.

·        The poem is composed in stanzas of four lines each rhyming aabb. Lot of poetic repetition and beautiful use of poetic devices make it a musical, rhythmic and lyrical in nature.

·        The message of the poem is that humble and modest people don’t show but act on time. 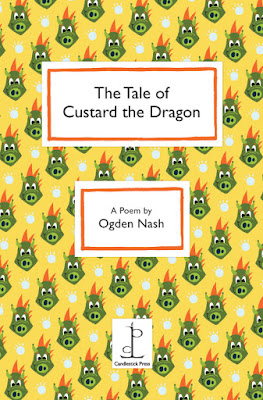 The poem is a story of a little girl, Belinda who lived in her little white house with her four pets. She had a kitten, a mouse, a dog and a dragon. She also had little red wagon which is her car.  The name of the kitten was Ink, mouse was called Blink. The dog’s name was Mustard as it was as sharp as mustard. The dragon was coward and shy, so Belinda called it Custard. Custard had sharp teeth, spikes on its upper body and scales underneath the body and sharp toes. The mouth of dragon was like a fireplace and its nose was like a chimney.

Belinda and her pets bragged highly about their bravery. But, Custard didn’t consider himself brave and never boasted about his power. He always cried for a nice safe place for himself. Belinda and her pets made fun of dragon’s cowardly nature and sarcastically called him ‘Percival’. The car would shake and the house would echo with their laughter.

One day they all heard an unpleasant sound. They cried helplessly as they saw a pirate who entered through a window. The pirate had pistols in both his hands and a bright knife held in his teeth. His beard was black and one of his legs was wooden. It was clear he didn’t mean any good.

Seeing the pirate, Belinda was fearful and cried for help. All ran away to hide themselves. However, Custard came forward and made fearful sounds, twisted his body and attacked the pirate. The pirate was surprised and terrified, so he drank little wine and fired two bullets but they did not hit Custard. Finally, Custard tore him into pieces and ate him.

Belinda and the pets being happy hugged Custard and danced around him joyfully. Not one of them was sad for the pirate.  However, things didn’t change much even after the incident. They continued speaking of their bravery and Custard remained as humble and meek as ever. Belinda still lives in her white house with her pets.

The poem ‘The Tale of Custard the Dragon’ is a ballad. It is a story of a little girl named Belinda who lived in her little white house with her four pets. She had a little black kitten, a little grey mouse, a little yellow dog and a dragon. She also had little red wagon which is her car. They lived together like a happy family.

The name of black kitten was Ink and grey mouse was named as Blink. The dog’s name was Mustard because it was as sharp as mustard. The dragon was really and truly very coward and shy. Belinda called it ‘Custard’.

Describing the appearance of the dragon the poet tells that Custard had big and sharp teeth. It had spikes on its upper body and had scales underneath its body. The mouth of dragon was like a fireplace as it was very hot. Its nose was like a chimney. Its toes were like knives as it had sharp nails on its toes.

Belinda and her pets always brag highly about their bravery. Belinda considers herself brave equal to many bears. Ink and Blink thought that they were so strong and brave that they could chase the lions and force them to run away. Mustard finds himself brave enough to defeat an angry tiger. But Custard never considered himself brave and never boasted about his power. On the contrary, he behaved as a coward. He always kept crying and seeking a nice safe place for himself.

That’s why, Belinda used to tease and irritate the dragon rudely. Her pets also made fun of dragon and sarcastically called him ‘Percival’ who was a brave knight in the army of King Arthur. Belinda and her pets used to laugh at the dragon who was really and truly a coward. They used to make fun of him mercilessly and loudly while sitting in the red wagon.

Belinda laughed so loudly that she would shake the house and the whole house would echo with the laughter of the pets. Ink and Mustard would ask the dragon about his age in order to make fun of him and the dragon would seek a nice safe place to hide himself.

Suddenly, they all heard an unpleasant sound. Mustard growled out of fear. They all looked around. Ink and Belinda uttered a loud cry because they saw a pirate who entered the house through a window.

In this stanza the poet described the pirate making a beautiful use of imagery. The pirate had pistols in both his hands. He was holding a shining knife in his teeth. His beard was black and one of his legs was made up of wood. It means leg was artificial. His appearance made it clear that he didn’t mean any good. It was evident that he came to rob them.

Seeing the pirate, Belinda lost colour of her face due to fear. She started crying for help. Mustard, being too much terrified, ran away from the place. The kitten ran to the innermost part of the house and mouse ran to the deepest hole to hide themselves.

When all of them ran away to save themselves, Custard came forward showing lot of courage and made fearful sound like that of an engine. It clashed its tail and made a loud sound as if he was hitting the iron bars in a dungeon. The dragon made sounds, twisted its body in a circular motion and attacked the pirate in the manner a robin jumps on the worm to eat it.

The pirate was little surprised and terrified, a bit. He drank little wine from his pocket container to make himself energised. Then, he fired two bullets but, they did not hit Custard. Finally, Custard tore him into pieces and ate him.

Belinda was so happy and excited that she hugged Custard. Mustard, being very pleased started licking him. Ink and Blink danced around the dragon joyfully. Not one of them was sad for the pirate.

However, things didn’t change much even after the incident. They started giving excuses for running away from the spot. Mustard said that he would have also shown his bravery, if he hadn’t been confused and dizzy. Similarly, Ink and Blink also gave excuses and spoke about their bravery. They all continued speaking of bravery and Custard remained as humble, meek and gentle as ever.

The last two stanzas are repeated to emphasise and highlight that Belinda still lives in her white house with her pets joyfully and noisily. All of them continued speaking high of their bravery and Custard retained his meek and gentle nature.

Strategically – creatively, in a planned way

Note : Being a lyrical ballad it is full of poetic repetition and poetic devices based on sound such as alliteration, assonance and consonance can be found in almost all lines.

With a little black kitten and a little grey mouse – poetic repetition, assonance

And the little yellow dog was sharp as Mustard – simile, anaphora

But the dragon was a coward, and she called him Custard – alliteration, consonance

And spikes on top of him and scales underneath – alliteration, ploysyndeton, imagery

Mouth like a fireplace, chimney for a nose – simile, metaphor, imagery

Belinda was as brave as a barrel full of bears – alliteration, simile, hyperbole

And Ink and Blink chased lions down the stairs – repetition, assonance, hyperbole

Mustard was as brave as a tiger in a rage – simile, hyperbole, repetition

Belinda giggled till she shook the house – hyperbole, alliteration, assonance

And Blink said Week! which is giggling for a mouse – onomatopoeia, assonance

And Mustard growled, and they all looked around – onomatopoeia, consonance

And he held in his teeth a cutlass bright – alliteration, imagery

His beard was black, one leg was wood – imagery

But Mustard fled with a terrified yelp – irony, consonance, onomatopoeia

Ink trickled down to the bottom of the household – irony, assonance

But up jumped Custard, snorting like an engine – simile, onomatopoeia, consonance

Clashed his tail like irons in a dungeon – simile, hyperbole, imagery

With a clatter and a clank and a jangling squirm – onomatopoeia, assonance, poetic repetition

He went at the pirate like a robin at a worm – simile, imagery

And gulped some grog from his pocket flagon – alliteration, imagery

Ink and Blink in glee did gyrate – alliteration, assonance, imagery