On Killing a Tree

On Killing a Tree

Analysis of the poem 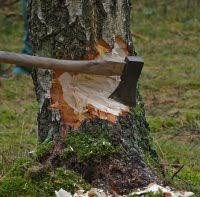 §  The poem ‘On Killing a Tree’ is composed by Gieve Patel, an Indian playwright, poet and a doctor.

§  The tone of the poem is sarcastic and didactic as the poet teaches us to be kind, loving and sympathetic to nature.

§  The poet wants to sensitise the readers against cruel and unsympathetic treatment towards nature and indiscriminate felling of trees.

§  It is composed in blank verse and doesn’t follow any rhyming scheme. The poem is divided in four stanzas but the stanza division and line length is irregular.

§  The theme is that the trees and plants are alive just like all of us.

§  A very significant message is conveyed through the poem that we should not cut trees and trees have life, they take birth, feel pain and die.

·       The poem opens with a beautiful but sarcastic statement by the poet about ‘Killing’ a tree. He says that a tree can’t be killed so easily and so simply. Actually, he wants to convey something different. He taunts how trees are cut or ‘killed’ so mercilessly all over the world as man keeps cutting them, taking much time and much pain, but the trees shouldn’t be killed.

·       He further says that it is difficult to kill a tree with the knife or axe. It takes much time and much effort to cut a tree completely. The tree takes years to grow on the earth. It consumes the nutrients of soil, sunlight, air and water.

·       The poet says that simple cutting and chopping is not sufficient to kill a tree. After sometime its bleeding bark will heal and new leaves will come out from the bark, the leaves will grow into small branches and then the tree will grow to its earlier size.

·       Now, the poet tells how to ‘kill’ a tree. He says, its roots must be pulled out entirely from the soil which acts as the anchor to the tree. First. The tree must be tied with a root and pulled out using lot of efforts and strength. When it is pulled out of earth completely, its strength is exposed. The strength of a tree lies in its roots which are white and full of moisture as they keep hidden inside the earth for years. The roots are the most sensitive part of a tree as well as the source of its strength.

·       After the tree is pulled out with its roots, the roots get exposed, they lie in hot dry sun and the air sucks out its moisture. Thus, the roots become dry, brown and hard. They become twisted and lifeless. And finally it is killed as it can’t grow again.

Message of the Poem

Theme of the Poem

The poet considers the tree as a living organism. But the man is killing it with utmost cruelty and callousness. It implies that a person shall be a murderer if he ‘kills’ a tree this way.

The poet is composed in blank verse as the lines of the poem don’t rhyme.

It takes much time to kill a tree – Alliteration, sarcasm

Rising out of it, feeding – personification, enjambment

And out of its leprous hide – metaphor

The bleeding bark will heal – personification

Which if unchecked will expand again – assonance, consonance

Out of the anchoring earth – metaphor

It is to be roped, tied – assonance, consonance, asyndeton

And pulled out — snapped out – repetition, consonance

Out from the earth-cave – metaphor

Of scorching and choking – consonance, assonance

And then it is done – assonance