In the Kingdom of Fools

In the Kingdom of Fools

By A. K. Ramanujam

·       The chapter ‘In the Kingdom of Fools’ is written in Kannada language by A. K. Ramanujam who has compiled many other folk tales in his book ‘Folk Tales from India’.

·       ‘In the kingdom of fools’ is an interesting and humorous story about a kingdom run by a foolish king and his stupid ministers.

·       This story has been translated and published in English as well as many Indian regional languages.

·       The story highlights that the order set by nature and natural laws need to be followed. It propounds that day is meant for work while night is meant for rest and sleep.

·       The foolish king and his minister who tried to change the laws of nature were punished by the destiny. Finally, the nature’s law was restored by a wise Guru and his disciple. 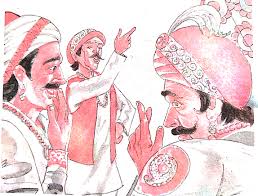 ·       In the kingdom of fools no one was allowed to work in day and sleep at night. Every one including the smallest animals used to sleep in day and carry out their business only after it is dark. One more strange rule was followed in the kingdom that everything cost same – one duddu.

·       Once, a Guru and his disciple visited the town and were surprised to notice strange rules of the kingdom. The Guru told his disciple that he should not stay in the city as it was the kingdom of fools. The rules were strange and they should not trust anyone as the foolish king and ministers may do anything to anyone.

·       One day a thief broke into a merchant's house but wall of his house being weak fell on thief and killed him. the thief's brother appealed to the king to punish the merchant for building a weak wall that killed his brother. The merchant was called but he blamed the bricklayer for building a weak wall. The bricklayer accused a dancing girl for distracting him as she was walking up and down the street again and again and jingling her anklets. The dancing girl was called but she blamed a goldsmith who delayed her order and called her again and again to collect her jewellery. The goldsmith accused a rich merchant who gave an order of jewellery for wedding and was impatient that's why he could not finish dancing girl's jewellery in time. Finally the rich merchant was declared to be the real culprit but he happened to be the dead father of the merchant who was called first in king's court.

·       A new stake was made for the execution. When the merchant was brought for execution, he was found to be too thin to fit the stake. The messengers were sent to find a fat man to fit the stake and they caught the disciple who became fat eating cheap food for few months.

·       The disciple was brought for execution by the servants. That time he remembered his guru’s words and called his guru for help. The guru saw this in his vision and came for his help.

·       With the wish to become king and minister in their next birth, the king and the minister got themselves executed on the stake and the Guru and his disciple were made king and minister by the people of the kingdom. After that there too, the laws of the world were followed.

The chapter clearly highlights that nature’s rules and laws of the world need to be followed. Unlike the kingdom of fools day is meant for work and night is meant for rest. Price of a thing needs to be decided according to its value. The story teaches us not to be greedy. The disciple got into trouble due to his greed for cheap food.

Q1. How many people were tried in the king’s court and for what reason?.

Ans. First of all, the merchant was called in the king’s court because his wall was very weak and fell on the thief killing him on the spot. But, the merchant blamed the bricklayer because he built a weak wall and should be punished for not doing his work properly.

The bricklayer who has become old, accused a dancing girl for distracting him as she was walking up and down the street again and again and jingling her anklets. Due to this he could not keep his mind and his eyes on work.

The dancing girl was called but she blamed a goldsmith who delayed making her jewellery and called her again and again to collect her order.

Finally, the goldsmith was called and he accused a rich merchant who gave an order of jewellery for wedding and was impatient and insisted to receive his order of jewellery on time. That's why he could not finish the dancing girl's jewellery in time.

Finally the same merchant who was called the very first time, was called again because that rich merchant happened to be his father who had been dead.