Analysis of the Chapter

·        The short story ‘Bholi’ is written by K. A. Abbas, the Indian film director, novelist and journalist in Urdu, Hindi and English languages.

·        It is a dramatic story of a girl, Bholi who went through complete transformation in her character, attitude and personality and a revolutionary change in the course of her life. 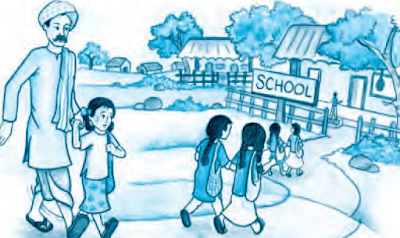 ·        The story depicts how education casts strong impact upon a simple and fearful girl and brought big transformation in her personality and life. Education has enabled her to take the most important decision of her life.

·        The story highlights that a teacher can play an important role in shaping a child’s personality, moulding his/her career and bringing a positive change in our society.

·        This story is about the transformation of a simpleton, Bholi into Sulekha who was a completely confident and self respecting girl after education, that’s why she broke her marriage with Bishambhar Nath and told her parents that she would serve them in their old age.

·       ·        The story is about Sulekha who is nicknamed as ‘Bholi’ as she is a simple and innocent girl. When Bholi was ten months old, she fell from her bed and damaged some part of her brain. Due to that she remained backward in mental ability and she stammered, too. She suffered from smallpox when she was two years old, and it left deep pock marks over her body.

·        Ramlal had seven children—three sons and four daughters. Bholi was the youngest. His sons went to cities for education. Two of his daughters were married. Ramlal was only worried about Bholi who was neither beautiful nor intelligent. All used to laugh at her.

·        When a primary school was opened in the village by the Tehsildar, he asked Ramlal to send his daughters to schools setting an example for the villagers. At first Randal’s wife objected but Ramlal felt that it would be difficult to get Bholi married so she should at least get little education.

·        Bholi was given some decent clothes to wear on the first day to school. New clothes had never been made for her. she used to wear the old dresses of her elder sisters. Bholi has never been out and she was scared to think that her cow, Lakshmi once went out of house and was sold. Bholi was scared in the school, too but, she was delighted to look at the pictures in her class.

·        The teacher asked Bholi her name. She stammered and could not tell her name properly. The teacher neither got angry nor laughed. She encouraged Bholi and patted her with love. No one had ever spoken to her in that manner. She also told her that she would speak rightly one day and then she would not be afraid of any body. The teacher gave Bholi a book and told her that soon she would be able to read more books and bigger books. She would then be more educated than anyone else in the village, no one would laugh at her and every one would respect her. Bholi felt as if the bells in the village temple were ringing. Her heart was beating with new hope and new life.

·        After some time the village became a small town and the primary school became the high school. Ramlal received a marriage proposal for Bholi by Bishamber Nath who was the owner of a big shop and had a house of his own. He was about fifty years old. He limped also. He had the children from his first wife.

·        On wedding day Bishambhar came dressed as bridegroom with a big party and a great pomp and show. Everyone got jealous of Bholi's luck. At the time of garland ceremony, women slipped back Bholi’s veil. Bishamber looked at her face full of pock marks, so he asked for a dowry of five thousand rupees else, he would go back without marrying. Ramlal put his turban at Bishamber’s feet and requested to accept two thousand rupees but Bishambhar didn’t budge. At last he put five thousand rupees at Bishamber’s feet.

·        Then, Bishamber asked for the garland. But, now Bholi looked straight at Bishamber. As he raised the garland to put it round Bholi’s neck, she threw it into the fire. She told her father that she won’t marry Bishamber and asked him to take the money back. She told that she could marry the lame old man, but not a greedy person who can’t respect her parents.

·        All the women wondered how Bholi, a dumb cow had become so violent. Ramlal was down with shame and grief. He asked Bholi what she would do if no one marries her. Bholi told him that she would serve her parents in their old age and teach in the same school where she had got education. Her teacher was glowing with satisfaction and pride. She felt proud like a great artist does on the creation of his masterpiece.

K. A. Abbas through ‘Bholi’ has brought out the message very clearly that ‘Education is that which liberates’. A dumb cow and a simpleton Like Bholi after getting education goes through a complete transformation. She is no more Bholi but she met with Sulekha, her real identity. Now, she could identify between what is right and what is wrong. She is no more fearful but a confident and courageous young lady who could take the most important decision of her life that she would not marry a greedy and disrespecting man. Education enabled her to decide that she would take care of her old parents and teach in the school where she got her education.