Conjunctions and their usage

They are also known as Connectors or Linkers.

They join two or more simple sentences to make a compound sentence.
They are of four types :

1. Cumulative Connectors  ( adding an information, similar fact ) – and, also, as well as, not only – but also

Rakesh and his friends went to watch a movie, today.
He won a prize for debate competition as well as scored 91% marks in class.

2. Adversative Connectors ( joining two contrasting facts/traits/conditions) – but, still, only, whereas, while, yet

She tried her best but could not win the competition.
Reena makes mistakes whereas her brother’s performance is flawless.
I have watched the play several times still I enjoy it.

3. Alternative Connectors ( adding two different options/ ) – or, either – or, neither – nor,  else, otherwise

Will you renovate the house or sell it off?
You may either stay here peacefully or get lost.
Complete your work otherwise you will be punished.

I was sick therefore I could not attend the meeting.
He is poor so he cannot afford this gift.
Pramod did not complete his work for he was sick.

They join two or more clauses to make one Complex Sentence. Following are the types of Subordinating Connectors :

a. Connectors of Place ( where, wherever)

I don't know where Sameer lives.
People will follow him wherever he goes.

b. Connectors of Time (when, Before, After, Since, till, until)

My grandfather had died before I was born.
He was sorry after he had done it.
We shall stay here till you return.
I have been living here since I was a child.

c. Connectors of reason (Because, Since, As, Why)

I believe it since you say so.
We should not smoke as it is injurious to health.
Rakesh did not attend the class because he was unwell.

d. Connectors of condition (If, Unless, provided)

Work hard if you wish to succeed in life.
He cannot achieve his goal unless he is focussed.
He may win the race provided he improves his speed.

Tom runs slower than Jerry (does)
Harish is not so smart as his younger brother.
She is as intelligent as her mother.

f. Connectors of Purpose (So that, that, lest)

You must work that you may live.
We must practise hard so that we may win.
He held my hand lest I should fall.

g. Connectors of Manner (How)

I could not notice how she broke the watch.
You would never know how he reached here.

h. Connectors of Concession (Although, Though, yet)

Though Alok is poor, yet he is honest.
Although it was dark, I could see his face.

Email ThisBlogThis!Share to TwitterShare to FacebookShare to Pinterest
Labels: Conjunctions, connectors, How to use Conjunctions correctly, linkers

Future Tense at a glance 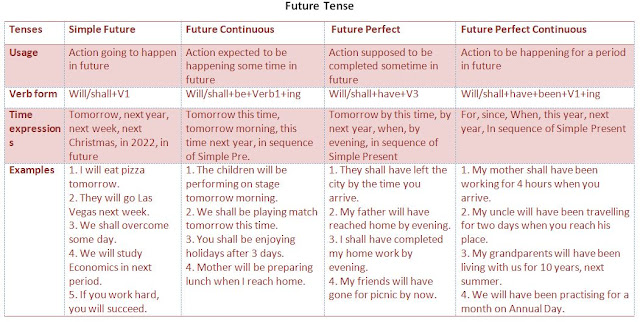 Doer (subject) is given more importance.

Subject is placed in the beginning.

Action is given more importance.

Object is placed in the beginning.

Sentence structure
Object + helping verb (if required) + appropriate form of ‘be’ + V3 + by + subject
e.g. Agra has been visited by me.

A - Listen to me, please. (request)
P - You are requested to listen to me.

A - Sneha gave me a pen. (pen is direct object and answer of ‘what’)
P - A pen was given to me by Sneha. (direct object is placed in the beginning)

A - My father gifted me a watch.
P - A watch was gifted me by my father.

A - Pratap catches a big fish.
P - A big fish is caught by Pratap.

A - Help the needy
P - The needy should be helped.

A - Who will cook the food, today?
P - By whom will the food be cooked, today?

Change the voice of the following sentence.

a. I will help you.
b. My pocket has been picked.
c. People speak English all over the world.
d. He was appointed as monitor.
e. The light has been put out.
f. They gave the children sweets.

a. You will be helped by me.
b. Someone has picked my pocket.
c. English is spoken by the people all over the world.
d. They appointed him as monitor.
e. Someone has put out the light.
f. Sweets were given to the children by them.

Read the following instructions and complete the paragraph that follows.

First of all, take a pan.
Pour a cup of water into the pan and let it boil for a minute.
Add a teaspoon full of tea leaves in the boiling water.
Add sugar according to taste.
After another minute, strain the tea into a cup.
Add little milk and serve hot.

a. is poured
b. is added
c. is added according to
d. is strained
e. is added and served

Direct Narration – a dialogue between two people face to face
e.g. Mohan says to Radha, “I have completed my work.”

Indirect Narration – the same dialogue reported to the third person.
e.g. Mohan tells Radha that he had completed his work.


Note : Tense does not change in the sentence that conveys universal truth or the facts.


Note : Reporting verb and inverted commas  change according to types of sentences.

Answers :
a. Gita told mother that she wanted to take rest.
b. The teacher said that the earth moves round the sun. (Universal Truth)
c. Mohan told his friend that he didn’t know the fact.
d. He asked Ravi if he could help him.
e. Mr. Khanna advised his son to help the needy.
f. Sohan suggested his neighbour that they should clean the backyard of their houses.
g. Pyare Lal exclaimed with grief saying that he was ruined.

Exercise 2
Santa : Why are you crying?
Banta : My hen has died. I poured boiling water in its mouth.
Santa : but why?
Banta : I thought, this way it will give boiled eggs.

Answers :
a. he was crying.
b. his hen had died
c. he had poured boiling water in its mouth.
d. it would give boiled eggs that way.

Exercise 3
Renu : Why do you look so sad?
Tanuj : Some one has stolen my wallet’
Renu : Where did you keep your wallet?
Tanuj : In the back pocket of my trousers.