Tenses are mainly divided into three parts – Present, Past and Future. They are further subdivided into four categories – Indefinite, Continuous, Perfect and Perfect Continuous. 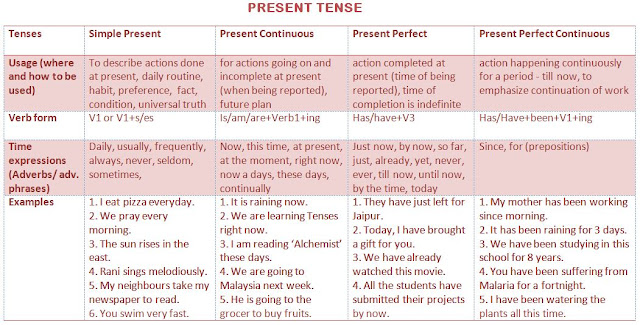 Present Continuous Tense describes an action which is continued, in progress and incomplete at the time when it is talked about or reported. That’s why it is also known as Present Progressive Tense.

Present Continuous Tense is used to -

4.     describe a temporary event or situation or shift from regular or routine action :
·        He usually plays the drums, but he's playing bass guitar tonight.
·        The weather forecast was good, but it's raining at the moment.

5.     describe a trend in contemporary society or during this period of time :
·        Now a days more and more people are becoming vegetarian.
·        Today, everyone is spending time on Social Media.

Adverbs used in the tense

Verb form used in the tense 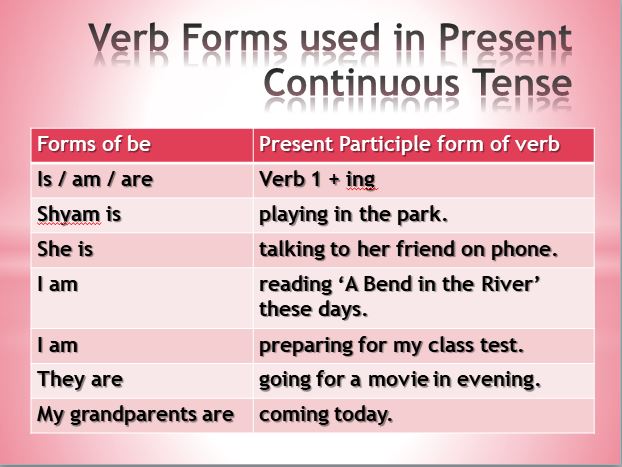 The verbs which convey sensory actions, perception, possession and state of mind are not used in present Continuous Tense.

More such verbs are:

1. When a main verb ends with a consonant which is preceded by a vowel, the last consonant gets doubled after adding ‘ing’ to it. (The consonants W, X and y are an exception. E.g. drawing, playing, waxing)
e. g. swim + ing = swimming
run   + ing = running
cut    + ing = cutting

2. When there are two syllable in a verb and second syllable is stressed, the last consonant preceded by a vowel gets doubled after adding ‘ing’ to it.
e.g.    refer   + ing = referring
travel + ing = travelling
begin  + ing = beginning

Note : All other verbs that don’t fall in category of above rules remain unchanged after adding ‘ing’ to them. Their spellings don’t change.  E. g. going, opening, watching, singing, hearing, smelling, laughing, etc. )

The baby is sleeping in his crib.
We are visiting the museum in the afternoon.
Rose is reading a book, now.
She is not going to the game tonight.
He is meeting his friends after school.
Are you visiting your cousin this weekend?
Is John playing football today?
Frank is talking on phone at the moment.